skip to main | skip to sidebar

In an effort to not be yet another yuppie "baby-blogger" I went on a long hiatus, but now I'm back because we have some damn cute pictures to show off and because I watched Julie & Julia last night and it made me miss blogging. Even if I don't get comments and I very well may be sending this off into cyberspace where only some misdirected Googler stumbles across it, that's okay.

Haddy is almost 18 months old and has just started walking within the past week or so. Yeah, she's a late bloomer in that arena, but it's mostly because she crawls at the speed of light and had no need to walk until she decided she was missing out. I've also read from many sources that it's not uncommon for the younguns to direct energy from one area of development, like walking, to another area, like talking. And man can she talk, so maybe that was her master plan all along.

She has many teeth with which to bite me when she becomes angered by my abilities to take things from her, much hair (which mom gave a trim one morning when I was sleeping--I was horrified that I missed her first haircut), and super-secret-baby-ninja punching talents. I swear, she knows the vulnerable parts of my body to pinch really hard (like underneath my upper arm when I'm on the computer), and uncommon, yet effective, areas to punch me really hard (like my collarbone).

She talks all the time. Today she was saying, "Oh, baby!" all day, and then when she fell backward off her tiny recliner, she sobbed, "Oh, babeeee!" It was at once hilarious and concerning. She says, "Dank yoo!" when there is an item exchange between us, when we ask, "Who loves Mama/Dada?" she says, "I do!" (When asked, "Who loves Sissy?" she just mumbles with her mouth closed. Thanks, kid.)

Also she has taken to saying, "Oh, shit!" when something unfortunate happens. Mom is embarrassed that she knows that so early, but hey, what else usually comes out when you knock a cup over or something? God won't smite her for mimicking something. He might smite me, though, I'm kind of smite-worthy.

We have prolonged putting up the Christmas tree, I think for a shared and unspoken fear that she will immediately pull it down on top of herself and be crushed to death by holiday spirit. Also she likes to steal things. I can picture it now, a secret nest, located underneath a couch, of shiny and useless junk, like Wall-E the robot. A single deadly shard of a red glass ornament will perch on the top of the pile, like a peasant king, just waiting to be inserted into an unsuspecting mouth.

Anyway, here's some cute pictures to hold you over for the next 5 months if I don't show up again. 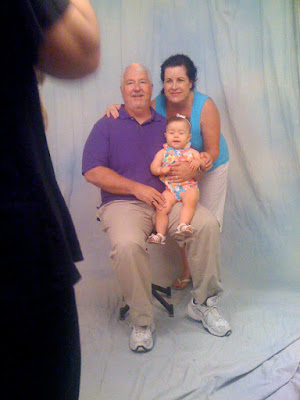 When we went to take the pictures, I pulled out my phone to get a quick snap of the setup, and that photographer lady said, "No pictures in here." When she had her back turned I muttered, "Nobody tells me no!" and proceeded to take some anyway. Kevin laughed. 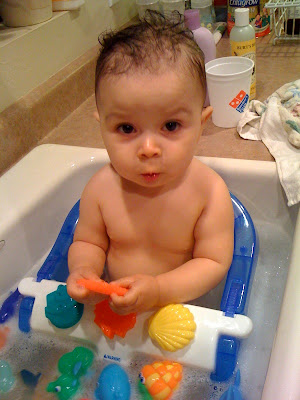 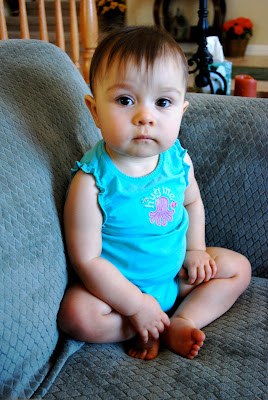 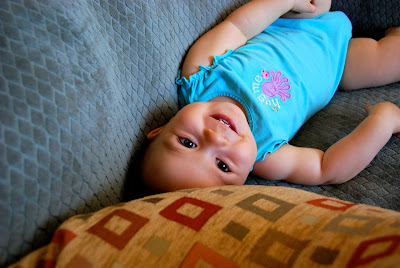 And a happy child! (ignore the over-loaded diaper) 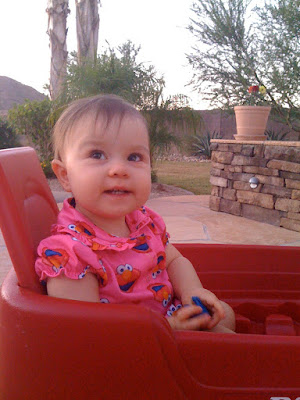 Hangin' out in the backyard in our little red (cool) plastic (less cool) Radio Flyer wagon. 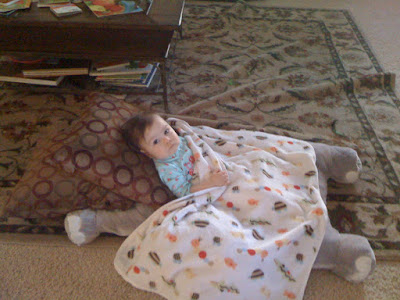 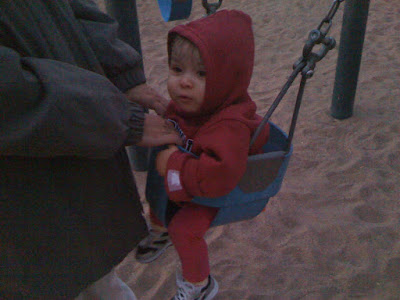 First time in a swing. I think this is the one and only frame where she looks like she has the barest trace of happiness on her face. Right after I took this, she began wailing in fear. 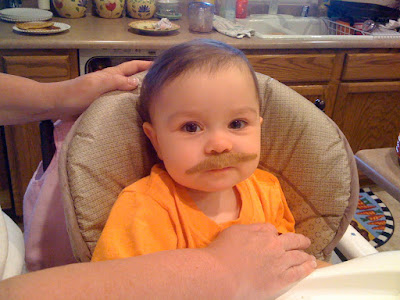 I briefly considered arguing that she go as Gary Oldman for Halloween. 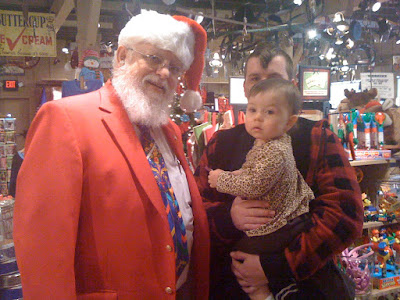 Some fantastic and creative soul decided to dress up as Santa Claus for a random breakfast at our local Cracker Barrel! Haddy was terrified, sure, but he gave her a candy cane and she didn't mess up the picture. Also, Kevin's one good eye.

That last picture was probably the most awkward experience of my whole life, too. I spotted him standing just inside when Kevin and I came back from the parking lot, and I said, "Hurry! Go get Hadley so I can get a picture!" I don't know what took him so long, but Santa and I stood there for the longest 60 seconds of my life just looking at each other. I had a huge, creepy grin on my face because he was just so awesome and come on it was SANTA. It was like a conditioned response for me to get involuntarily excited.
published at 11:45 PM

So good to see new pictures. About time! Haha. She is a doll and I am so glad you are getting to enjoy every moment! Have a wonderful Christmas and a blessed new year!
P.S. Hanna has plenty of new pics on her site too!

What is the Legume Diaries? And who are you people?

The Heinl Family
Phoenix, Arizona, United States
Sometime in November 2007, two 50-year-old parents with teenagers discovered they would suddenly be +1 little Peanut, who arrived in June. This is their story; what has been written, and what they write along the way.